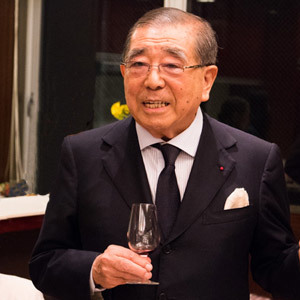 It goes without saying that all Japanese Burgundy wine-lovers are delighted with the recent inscription by UNESCO of the Climats of Burgundy as a World Heritage site . I would therefore like to begin by expressing, as President of the Japanese Commandery of the Brotherhood of Chevaliers du Tastevin of Burgundy, my wholehearted congratulations to all those who spared no effort to achieve this international recognition.

I was for 13 years a Special Advisor of UNESCO, sent by the Japanese goverment, and I know better than anyone the difficulty and the red-tape that one can sometimes confront. For example, there are cynics who will tell you that the it is the ‘Climats’, not necessarily Burgundy wine, which have received this world-wide honour. However, even if the decisions of UNESCO are always nuanced, nobody would dare to deny that the wines of Burgundy are excellent!!

Japan, which is currently the the leading importer in the word of Beaujolais Nouveau, has at last become, during 2014 the third country importing Burgundy wine (not in volume but in value).

In the Asian-Pacific region, due to the past influence of the British Empire, the wine of Bordeaux was often the synonym for French red wine. Perhaps you will say that I am simple or even simplistic if I say that our Chinese neighbours like Bordeaux in general, and particularly Lafitte Rothschild. But in Japan, there are more and more people who appreciate a good Burgundy wine, and not necessarily just the Grand Crus.

And in several circles in Japan where wine-lovers meet, the majority of people consider that Burgundy is the King of French wines, while Bordeaux is but the Queen. Without wishing to interfere in purely French debates, we the Japanese will henceforth seek to savour Burgundies even more. I do wish that the members of the Phoenix Wine Club of Burgundy will help us to accomplish our dreams.

Mr ISOMURA, known to many both in Japan and in Europe as ‘Mr NHK’, was formerly a Senior Journalist and Managing Editor of NHK Broadcasting Corporation, and also Director General of the Japanese Cultural Centre in Paris.